What is Data Sufficiency in Bid Optimization? 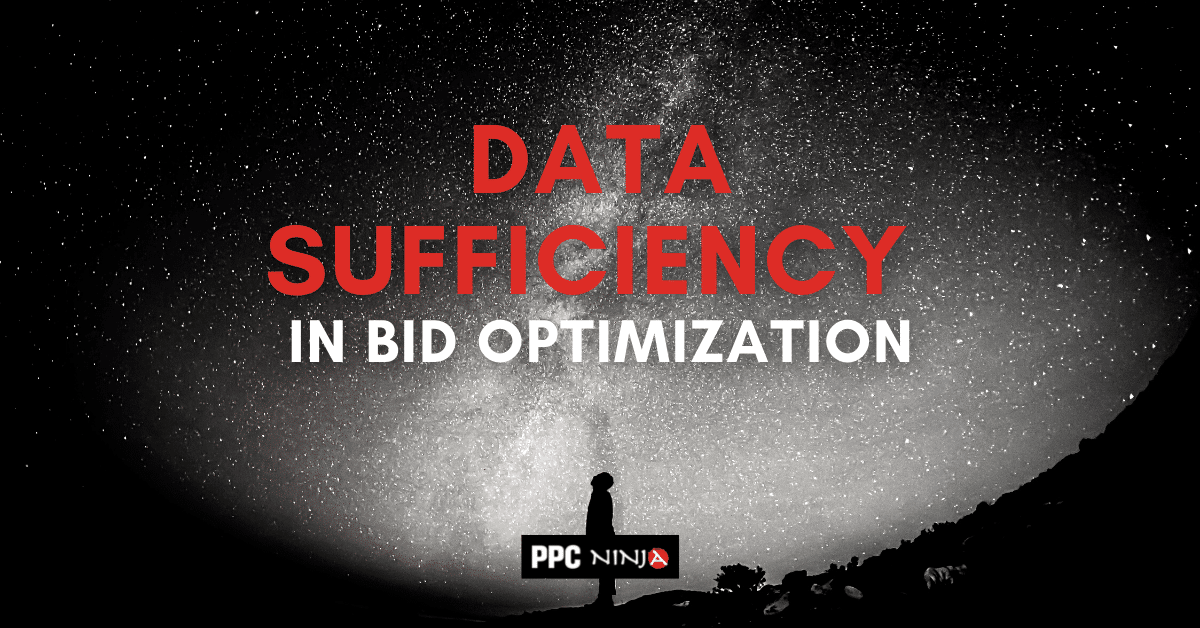 PPC is a numbers game, and you’ll need to get pretty good at it to win. In this article, I want to focus on the idea of data sufficiency in bid optimization. But before that, let’s get aligned on some basic concepts.

When it comes to making bid adjustments on an ongoing basis, there are three important factors to consider:

Most people follow the standard practice of downloading their search terms report for the past ten days. They make adjustments based on whatever data they see there. If the ACoS is high, they lower the bid by a certain percentage. They increase the bid by a certain percentage if the ACoS is low. And, if there are clicks and no sales, they lower the bid.

To avoid chaotic, panic-based bid adjustments, let’s try to approach bid optimization from the perspective of Triggers, Amounts, and Cadence.

How do you know you need to make a change? There are several signs or triggers in your data that tell you that a bid adjustment is imminent.

Some of the more important triggers include:

There are other triggers that you need to be watching periodically, but they might not be the ones you need to act upon with urgency.

You will need first to define what values constitute each threshold. For example, what is a good ACoS? If you haven’t done it already, it’s quite a worthwhile exercise to sit down and calculate your breakeven ACoS and then decide what target ACoS you want to go after per product. It will help you figure out if your performance is above or below limits.

Many people will focus on triggers like Spend and CPC and panic if they see high numbers. This panic is unwarranted because you never want to evaluate these numbers in isolation. Even if you have high spending and CPCs, you could still be highly profitable.

Once you have identified the need to make a bid adjustment, you’ll have to calculate how much the adjustment should be. While I have heard people prescribe rule-of-thumb recommendations that are percentage-based, I think your new bids need to be calculated individually for each keyword and not be based on an arbitrary amount such as 10% or 15% across the board.

The logical way to decide amounts is to use a formula for determining the ideal, profitable bid value derived from revenue per click and target ACoS. Some software, like PPC Ninja, will use an advanced algorithm based on more factors than just those two. But if you are managing bid changes by hand, then Sales/Clicks * Target ACoS is good enough as a formula for making bid changes.

Here are some examples of bid calculations to stay within target ACoS: 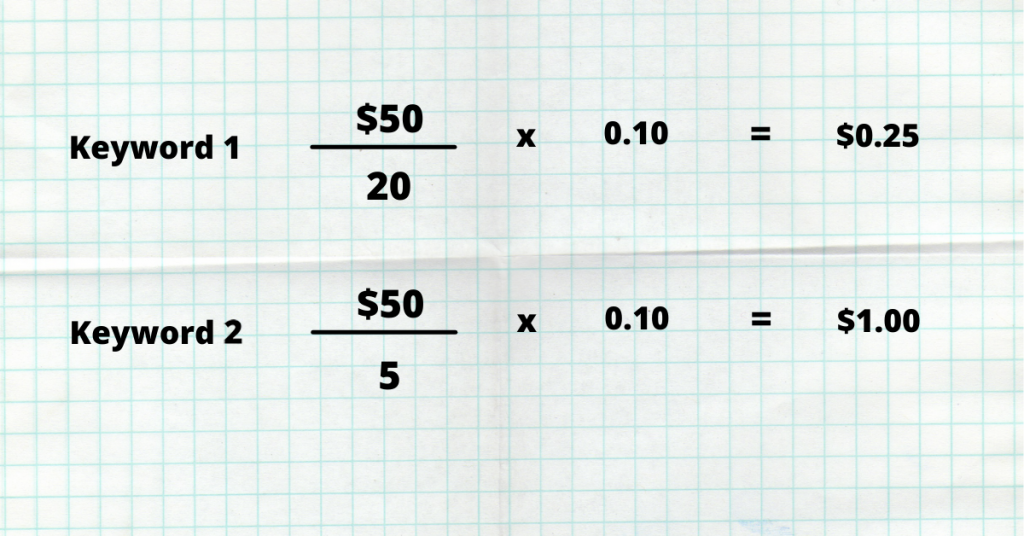 Notice the difference between Keyword 1 and Keyword 2. The second one has a better conversion rate (20%) than the first one (5%), and hence you can afford to pay a higher bid while still staying profitable.

If you are starting at a very high ACoS, be reasonable about the target ACoS.

If you set this value too aggressively, then the chances are that your adjusted bid value might be so low that you will lose impressions entirely. For example, if you are at 80% ACoS, even if you want it at 20%, it is better to aim for a 60% target first and gradually bring down your ACoS over time.

Also, during the launch phase of an SKU, you might want to allow your target ACoS to be a lot higher to pay to train the algorithm and gather data.

How often should you touch a bid? Every keyword or target has a different velocity of impressions, clicks, and sales. Some keywords are fast-moving, while some are slow. If you look at the past ten days’ worth of data for decision-making, you run the danger of making bid adjustments at the wrong time.

What if a fast-moving keyword accrued a ton of bad clicks and spent a lot of money in those ten days? Would you be comfortable waiting for ten days? And what if a slow-moving keyword had only clicks but no sales in that time frame? Because maybe it needed at least double the number of clicks before any sales could happen. Would you drop the bids or kill that keyword? Even if you reduced the 10-day window to a 7-day one, you would still make the wrong decisions for some keywords.

This is a classic dilemma for fixed time-based bid optimization carried out by this manual method. Some of the rule-based software have tried to tackle the problem programmatically by picking an optimization window that does not go by “absolute time” but by “data sufficiency.”

So what is Data Sufficiency?

Data Sufficiency is the idea that you’ll need a sufficient amount of data to make the right decision. Not too much and not too little.

Typically you will need to figure out how many clicks you need to make a conversion based on historical data. For example, since Keyword 1 has a lower conversion rate of 5%, you will need to wait for at least 20 clicks to see a conversion. So if your keyword accrued only ten clicks within the window, you might be tempted to lower its bid even though the time is not ripe.

And since the conversion rate of Keyword 2 is 20%, it means that with every five clicks, there should be a conversion. In which case, if you wait until the keyword accumulates 25 clicks, you might be too late. 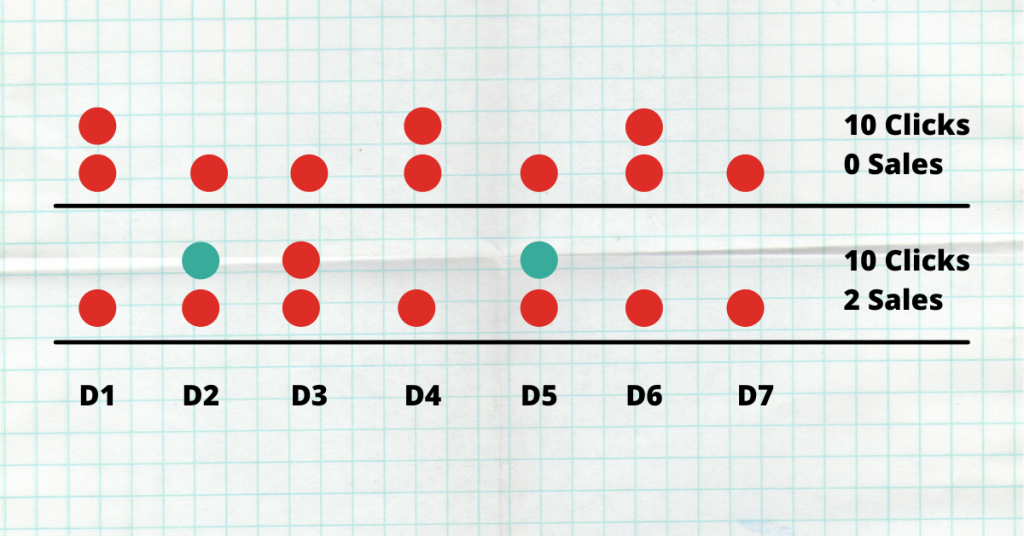 In a data sufficiency-based model, each keyword bid is only touched if it’s “ready.” You will need to count the number of clicks and sales between events such as bid changes or the last sale date to decide whether it’s time to make a change. Time, in this case, is of varying lengths.

Ideally, you would want to wait for at least two orders to have happened before you decide to change bids. Basing your change on just a single order is acting on insufficient data, as it might have been a one-off.

Unfortunately, there is no way to do this type of calculation accurately using manual bid adjustments. It’s humanly impossible to implement a data sufficiency model with fixed time-based spreadsheets with thousands of keywords to manage. The only way to achieve this is programmatic. Use software that can do all the heavy lifting for you.

What if the software is not an option for you?

What if the software is not an option for you, and you make manual bid adjustments with bulk files? Then your best bet is to add in extra columns to calculate conversion rates per keyword. After that, figure how many clicks and sales are necessary to make a change. Then, filter rows where the actual number of clicks and sales exceeds the necessarily required numbers. Only act on those keywords that have sufficient data. That would still be better than using a blanket percentage-based approach.

Did this article spark your interest? Be sure to check out PPC Ninja software that follows a data sufficiency model for bid optimization. Agencies love our software as it offers ultimate creative freedom and Ninja analytics and UI-based bulk operations to help you dive deep into every report. Sign up for a 14-day free trial here. 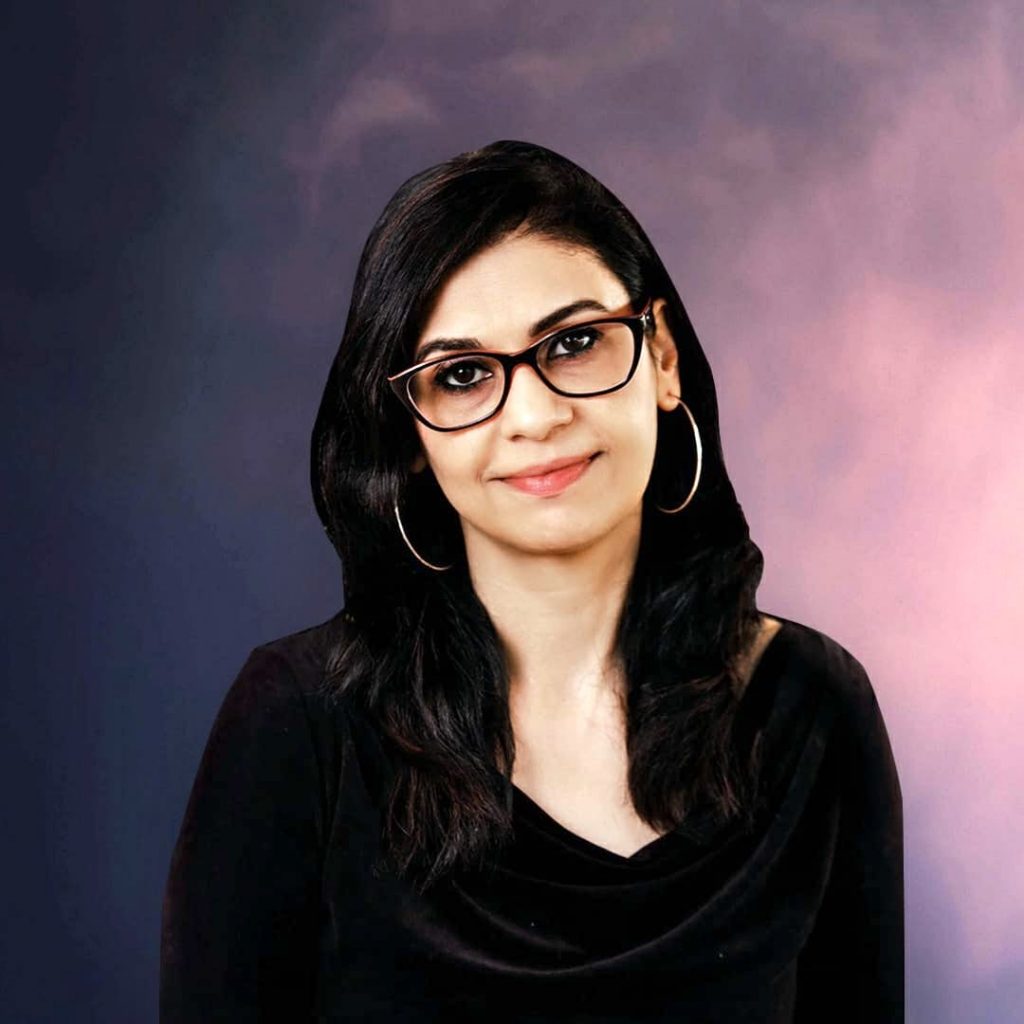 Ritu Java is the CEO of PPC Ninja, a software and services company managing sponsored ads and DSP for 6, 7, and 8 figure brands. She has run dozens of PPC mastermind programs, workshops, and webinars and trained hundreds of Amazon sellers on PPC as someone passionate about data analysis and advertising. Ritu has shared her knowledge on dozens of podcasts, webinars, and conferences, including the Prosper Show, Global Sources Summit, Empowery, and more.

We use cookies on our website to give you the most relevant experience by remembering your preferences and repeat visits. By clicking “Accept All”, you consent to the use of ALL the cookies. However, you may visit "Cookie Settings" to provide a controlled consent.
Cookie SettingsAccept All
Manage consent

This website uses cookies to improve your experience while you navigate through the website. Out of these, the cookies that are categorized as necessary are stored on your browser as they are essential for the working of basic functionalities of the website. We also use third-party cookies that help us analyze and understand how you use this website. These cookies will be stored in your browser only with your consent. You also have the option to opt-out of these cookies. But opting out of some of these cookies may affect your browsing experience.
Necessary Always Enabled
Necessary cookies are absolutely essential for the website to function properly. These cookies ensure basic functionalities and security features of the website, anonymously.
Functional
Functional cookies help to perform certain functionalities like sharing the content of the website on social media platforms, collect feedbacks, and other third-party features.
Performance
Performance cookies are used to understand and analyze the key performance indexes of the website which helps in delivering a better user experience for the visitors.
Analytics
Analytical cookies are used to understand how visitors interact with the website. These cookies help provide information on metrics the number of visitors, bounce rate, traffic source, etc.
Advertisement
Advertisement cookies are used to provide visitors with relevant ads and marketing campaigns. These cookies track visitors across websites and collect information to provide customized ads.
Others
Other uncategorized cookies are those that are being analyzed and have not been classified into a category as yet.
SAVE & ACCEPT